Motorola is back. Neglecting all the rumors about its successor, it has revealed that it is still the Moto G but with the added tag of 2014, it is making it the next big device and the next-generation Moto G. India has always been an influential market for the company and analogous outlook have ensured that sub-continent is the first market to get the new Moto G which is available utterly on Flipkart starting today midnight. There have been augmentation upgrades but even then Motorola has made sure the price doesn’t remain the same, in fact, it is priced lower than its predecessor. Users can buy the Moto G-16 GB model for Rs 12,999 and if they end up buying one today then they are likely to get slew of alluring freebies on tow, according to Flip cart. 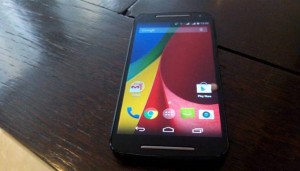 Review: The Moto G gets a bashed up display and camera though everything else remains the same which enables the company to retain its pricing viewpoint in India. It owes a 5-inch 1280x720p display and it runs on Android 4.4.4 KitKat version with promised roll out of future updates according to Google. It packs up the same 1.2 GHz quad-core snapdragon 400 chipset with 1 GB and it offers 16 GB internal storage which can now be expanded up to 32 gigs.
Camera: Users will get their expectations come true. They’ll get an 8 MP rear snapper with LED flash and a 2 MP front camera for Selfie lovers. The phone’s on the bulky side, with dimensions of 10.9 mm thickness and 149 grams. It is offering a dual-SIM support and it will have Wi-Fi, Bluetooth, GPS and FM Radio as well. With the battery powered up to 2070 mAh which still remains non-removable.
Motorola has supervised the price of the model and for the Moto G 16 GB model; Rs 12,999 seems to be worthy.