All have LGA2066 socket as used on X299 motherboards, and all the processors vary core count, with slight variations on core frequencies, TDP and price. The processor specs are the most concern performance. The raw clock speed determines how the process speed and any one thread can be acted upon, while the core and thread counts control how many threads are there or tasks can be calculated in parallel way. Finally, Intel has announced all of the clock speeds of the Core i9 family. They’re all unlocked Intel core i9-series processor family. 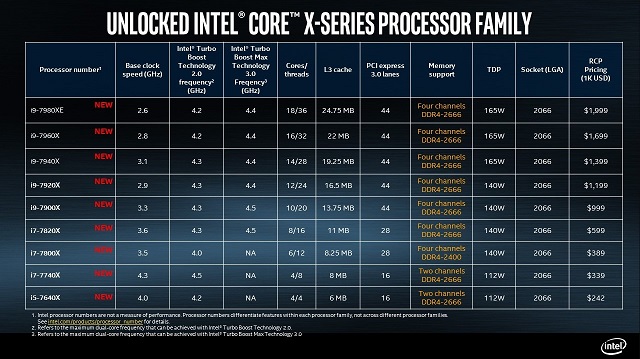 Whether you are working on your latest feature film or a YouTube web series, the unlocked Intel Core i9-series processors helps to perform smoothly because they are designed to scale to your performance needs by using the two fastest cores at higher frequencies and up to 18 cores when extreme mega tasking is required. With an Intel Core i9-series processor, you can edit your video, render 3D effects, and compose the soundtrack simultaneously without compromising your computer’s performance.

There is an extreme performance work easily like digital 4K visuals, high speed memory and storage. When you creating your best work, you need the most responsive technology to handle multiple CPU tasks at once, you should go with Intel Core i9-series processor will helps you to work smoothly. There is a new features include, that has ability to overclock work with each core individually.

It’s combined with tools like Intel Extreme Tuning Utility and Extreme Memory Profile; you have a powerful kit for maximizing performance. All Intel’s new i9 chips come with 3.3GHz base clock speeds, and are capable of reaching up to 4.3GHz dual-core speeds with Turbo Boost 2.0, pushing that to 4.5GHz with Turbo Boost 3.0. The Core i9-7980XE has two more cores while being 15 watt less than power energy. Beyond its top of the line 18-core CPU, Intel also release the specifications of its 12-, 14- and 16-core processors that feature fewer cores, but support higher frequencies.