Like most other premium Ultrabooks, the Asus ZenBook Pro UX501 aims to impress. From both its core specs and sleek visuals, this Asus flagship cuts a striking figure. The laptop is a follow-up to last year’s ZenBook NX500, and it features a similar aluminum chassis, speedy SSD storage, and a 4K display – all at an attractive starting price of $1,499. 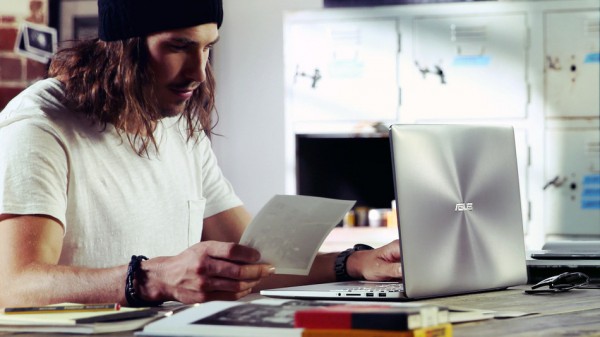 On the surface, it would seem that Asus continues to offer the ZenBook Pro UX501 as the PC-lover’s alternative to the 15-inch Retina MacBook Pro. That would be in keeping with the NX500’s positioning last year, and stays in line with Asus’s tendency to offer a value proposition over the competition. Asus has certainly achieved that by packing the UX501 with an Intel Core i7 processor, a 4K touchscreen display and a 512GB SSD. It’s a better-equipped triple play package than a comparably sized Apple laptop.

Where the UX501 falters is in its performance. While its benchmarks as a whole outpace Ultrabook class models, at 5 pounds, the UX501 is as much intended for your desk as it is your carrybag. Oddly enough, that’s a good thing, considering this model stumbled when it came to battery life, falling short of its stated 6 hour estimated battery life.

From the outside, the ZenBook Pro UX501 could easily be mistaken for a MacBook: Its brushed aluminum design aesthetic bears more than a passing resemblance. Its made of brushed aluminum, with subtle, concentric circles on the cover in keeping with other Asus designs. Overall, the build quality feels solid, though I never tested the theory by dropping the laptop.

While it’s clearly a rectangular slab, the UX501 has a stylish look. The edges are gently rounded, for example, and the inside surface sports chamfered edges that shine in contrast to the matte finish of the keyboard and palmrest. I’d worry about easily scratching these edges, but they add an elegant touch. While, the palm rest is large and comfortable, I wish that Asus shaved a little off the sides and depth of the laptop to reduce its footprint and weight.

The keyboard deck is adorned with a dotted patterning surrounded by silver painted plastic keys. The patterns look attractive, even if their purpose is purely for aesthetics. I dig the keyboard’s white backlight illumination, which I can control the brightness via the function keys.The light bleed beneath the keys is minimal, thanks to the design of the UX501’s keyboard making it all the less distracting – a frequent complaint I’ve had with early generation MacBooks. Also, the backlit keyboard will fade away when you’re not using the keys. Even without the illumination, the keys are clearly visible with black lettering.

The UX501 packs in the usual complement of ports, with three USB 3.0 ports, mini-DisplayPort and HDMI. It lacks an ethernet port, but Asus kindly bundles a USB ethernet adapter.

Though the UX501 is portable, at 5.0 pounds you probably wouldn’t want to take this dense, heavy laptop while traveling and dashing through airports or everyday to the office.

By contrast, the Apple MacBook Pro weighs nearly half a pound less, at 4.46 pounds – although this option model lacks a touchscreen display. The aforementioned Lenovo, meanwhile, is heavier, at 5.46 pounds.
If the weight alone isn’t a big enough deterrent against toting the UX501, its chunky power brick will be. On top of being heavy, the included power adapter lacks any additional conveniences, such as an extra USB charging port or two, something that would take a bit of the sting off having to carry such a large brick around.