Gionee has officially announced that their New Gionee M7 smartphone will be launched on September 25th at the event in Beijing.  The company also mentioned that they used Samsung’s AMOLED display with 18:9 aspect ratios.  Separately, the live images of the front panel of the Gionee m7 have also surfaced on the Internet.

Conversing initial about the formal data furnished by the corporation, the start poster from Gionee m7, shared on Chinese microblogging website Beijing, shows the day plainly as September 25. And also the Company has also scheduled Gionee m7 Power event in Thailand on September 28th. It will also come with a Full View display. 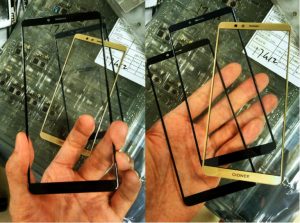 As per the leaked images, there are ultra-narrow bezels are used in the Gionee M7.  It is similar to the outline on launch poster; these images also hint that the phone might feature a near bezel-less display which has become a trend in the smartphone world this year. Gionee VP, Yu Lei said that the most smartphones these days came with the full screen, but the phone would be different from others.

According to the specifications and rumors about Gionee m7,

The Gionee m7 phone will run Android 7.1.1 Nougat out of the box.

The phone will be powered by the latest MediaTek Helio P30 processor with Mali G71 GPU.

Memory wise it will pack 6GB RAM and 64GB storage.

In terms of camera, it is expected to sport a 16MP primary camera with autofocus and flash. Other camera features might include 4K video recording, PDAF, HDR, and touch focus. At the front, it is tipped to sport an 8MP secondary camera.